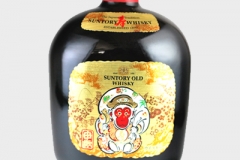 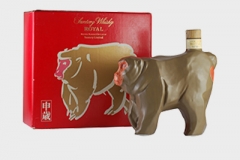 The year of the monkey is upon us. The monkey, being the 9th of twelve animals in the Chinese zodiac, is an interesting animal. Its known strengths include flexibility, wisdom, intelligence, confidence, charisma, and inventiveness. Weaknesses include arrogance, craftiness, and snobbery.

And what better way is there to celebrate the year of the monkey, than to purchase a bottle of monkey whisky? If that sounds like a good idea, then Suntory has thought of this for you, and luckily, we have your Suntory bottle! Below, we introduce them…

Suntory Old Oriental Zodiac Sign Series
The history of the Suntory Old Bottles is interesting. Word on the web suggests that Suntory Old bottles live up their name, and are so old that they date back to the 19th century. It is true that the bottles are old, having been featured in the 1967 Bond movie, You Only Live Twice, and drank by Sean Connery. However, it is not quite old enough for Lafcadio Hearn to enjoy it. It was, in fact, first introduced to the whisky market in 1950. Many believe Suntory Old to be older due to some of the earlier bottles being inscribed with the year 1899. This year is actually the founding date of Suntory, rather than the vintage year of the contents of the bottle.

Bottles of Suntory Old were released when the Japanese public finally began to appreciate the exotic taste of whisky. The whisky business in Japan was relatively young at the time and Suntory Old was considered a high class, high priced, and highly sought after whisky. During the first few years, the words ‘Ancient whiskies’ was printed on the bottle. By the 1960s, however, this was dropped, in favor of the choice wording: ‘A blend of choice whiskies’. The lineup also acquired its current name of Suntory Old Whisky.
In recent years, the label has followed the Chinese zodiac calendar, with a new animal on the label every year. The annually changing labels have caused the bottles to become extremely collectible items, owing to a limited number being produced every year. The newest label, will now adhere to the Chinese zodiac norm, and naturally display the monkey.

Suntory Royal 1992, Monkey
If having a picture of a monkey on the is not enough for you, then perhaps a bottle shaped like one will do the trick! It is also far older than the Suntory Old bottle, being released in 1992 which was also the year of the monkey. It is increasingly rare these days, making it the perfect choice for the collector. And while you are at it, why not grab that good looking tiger as well!?

The bottle contains Suntory Royal whisky, a whisky of somewhat higher grade than Suntory Old. While not quite as high up there as Yamazaki or Hibiki it is nonetheless excellent whisky.