On Thursday past, the moment to reveal our brand new Karuizawa bottling – The Budo Collection – finally arrived and we have been left teary-eyed by the incredible feedback we have received thus far.

Each of the bottles in The Budō Collection – Karuizawa 35 Year Old (1981 – 2017) #7147 Japanese Single Cask Whisky (45,000 USD; 3-bottle set; 51.00% ABV; 70cl) features art from one of three Japanese street artists, individually hand-painted by the original artists, and inspired by one of three modern Japanese martial arts: Kendo, Karate and Sumo.

Today, I’ll be looking to give you some further insight into the project, which has been over 3 years in the making. Here’s your behind the scenes look at dekanta’s The Budo Collection.

As with many Karuizawas, this particular cask was purchased by a private investor upon the legendary distillery’s closure in 2003. Since then, he had been waiting for the time to be right to do something exciting with the amazing liquid inside.

We were lucky enough to procure part of his investment a few years ago and upon tasting the cask with him we decided it was ripe for bottling, at 35 Years Old, in 2017. We wanted to ensure that the liquid was bottled at the optimal time and, despite knowing we would not be releasing this until 2020, we felt calling a halt to the maturation process and bottling at this time was the right thing to do.

The whisky was transferred from the cask into blank, empty bottles, which were sealed and stored away until such a time that our own bottle designs and ideas could come to fruition.  As one of the last remaining casks of Karuizawa whisky today, we knew it had to be special.

Having got our hands on such legendary liquid, the pressure was on to select a theme and create a bottle design that was worthy of the gold inside. Our team deliberated on this for some time, throwing a number of ideas back and forth, before we rested on the concept of Budō. 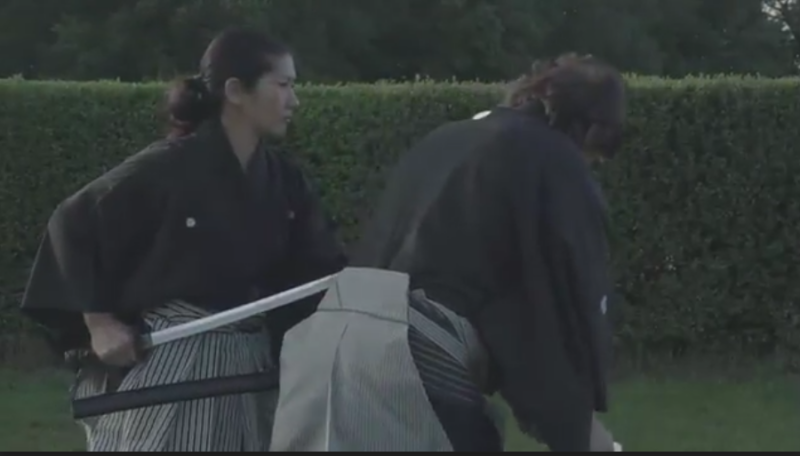 In a year that was set to be huge for Japanese culture and sport, we wanted something that embodied the way of life one must lead in order to achieve true excellence, in any field. Budō is a Japanese term to describe martial arts, and translates literally to ‘The Martial Way’. We saw this as the perfect fit. It would allow us to honour the dedication to craft which is shared by top martial arts practitioners, artists, sportspeople, and master distillers alike, while creating something magnificent and beautiful at the same time.

After honing in on our theme, we spoke to martial arts practitioners, including Paul Budden and Kazuyo Matsuda, in a bid to get a better feel for the concept. It was at this point that we began to realise that this was indeed a huge undertaking. After all, if you are going to honour the way of life that is Budō, and celebrate those who dedicate themselves to their craft through it, we ourselves would have to strive to achieve perfection in every possible aspect of the project.

It was a daunting task, but one that the team at dekanta was more than up for. 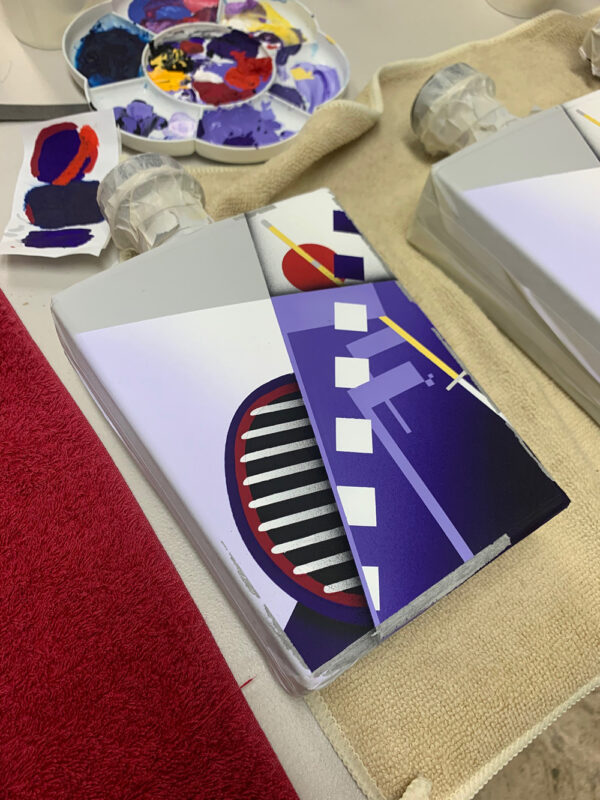 Having settled on the theme of Budō, we knew that we wanted every aspect of this bottle, from the whisky to the design, to be in-line with the concept and incorporate as many relevant aspects of Japanese culture as possible. We also knew that we wanted to do something that had never been done before.

When the idea of getting three of the best Japanese street artists to hand-paint every single bottle was floated, our team immediately fell in love and knew that this was the direction we wanted to go. While street art and luxury products don’t necessarily go hand-in-hand, we felt they were the perfect fit for this project, merging the contemporary with the classic and representing craftspeople from a multitude of walks of life.

After some extensive research and long conversations with a number of artists from around the country, we chose PHIL, FATE and TwoOne.

Each of these highly skilled professionals is famous across Japan and beyond, with brothers PHIL & FATE known for founding the Sca-Crew, while Yokohama-born contemporary artist, TwoOne, is recognised globally for his large-scale mural works.

Given each of these brilliant street artists had a grounding in martial arts and were familiar with the concept of Budō, they were the perfect fit for this project. We allowed each of them to choose their martial art from the three that we had selected – Sumo, Kendo and Karate – and then we waited for the concept art to arrive.

When it did, we couldn’t have been happier with the results, and having now seen the Budō Collection, we’re sure you can see why! 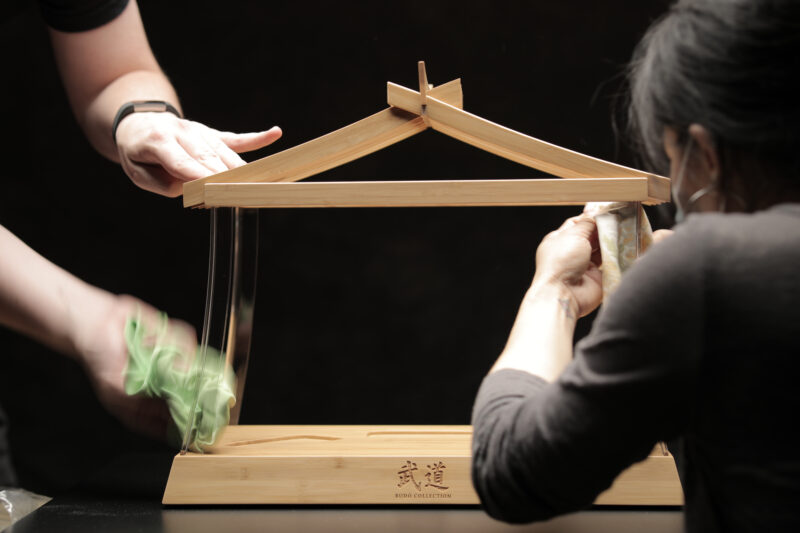 Creating exceptional looking bottles, housing legendary liquid inside, was a great start, but it wasn’t going to be enough for this collection. We also needed somewhere to house these bottles, something that would make them stand even further apart (no pun intended) from your average whisky bottling – we needed a stand.

For this, in-house Head of Design, Stu Cox, took on the task of creating a structure that would house the bottles, fit the theme and look absolutely stunning at the same time. Stu took influence from traditional outdoor Sumo Dohyo and traditional Japanese roof structures, but with a modern twist.

Modern Dohyos feature a hanging Tsuriyane (the suspended roof that resembles a Shinto shrine) suspended from the ceiling to avoid obscuring the view of the audience. The transparent legs of our stand are a subtle nod to the modern Sumo Dohyo.

The stand houses all three bottles side-by-side, as well as four elegant booklets, 3 of which detail the individual pieces of art, and one which outlines the concept of the collection as a whole.

It’s a carefully designed, hand-made, beautiful piece of craftsmanship that embodies all of the concepts of Budō, and will indeed take any whisky cabinet to the next level.

In order to really put the cherry on the top of the Budo Collection, we adorned the top of each bottle with a cap befitting their featured martial art. Once again, Stu’s impeccable attention to detail shone through, as he created three custom bottle ties influenced by the garb of practitioners from each martial art.

The tying process was an, at times, frustrating and lengthy one, but influenced by our theme, we worked diligently to make sure that every single one was as close to perfection as possible.The final hurdle before release was creating packaging that would fit with the premium, luxury feel of The Budō Collection, while providing more than ample protection for the groundbreaking bottles and stand inside.

The large, elegant white box has specially made foam inserts inside, each one specifically designed to tightly hold a different part of the collection, whether that be the bottles, the base of the stand or the roof.

We took great care to make certain that each and every piece is locked in place and properly protected, so that throughout shipping and storage The Budō Collection will remain in pristine condition and free of damage.

Despite a number of Covid-related issues that were thrown up along the way, we arrived at the launch date with everything in order. The years of work on this project were about to come to an end, as we revealed this wonderful collection to the world.

We hope that the dedication to craft in every single aspect of this magnificent bottling is apparent and that you are as inspired and impressed by the final product as we are.

If you’re one of the lucky ones to get your hands on a set, never let go. This is an iconic piece of Japanese whisky history right here and one that will no doubt be sought after for years to come.