Since the beginning of the Japanese whisky boom of the early 2000s, expressions from distilleries around Japan have been attracting millions of thirsty consumers around the globe. The delicate, perfectly balanced characteristics of whiskies from The Land of the Rising Sun have offered new horizons for aficionados to explore, along with new distillery stories to uncover and new heroes to admire – the perfect storm for attracting whisky-lovers.

When an industry explodes like this, an initial burst of growth is naturally expected, but Japanese whisky has differed from other industries in that the surge in demand and popularity has shown no real sign of slowing down. In fact, Japanese whisky continues to grow at such a rate that producers are working overtime to keep up with demand, massively increasing production and cutting back on the number of age-statement expressions that are available in the process. 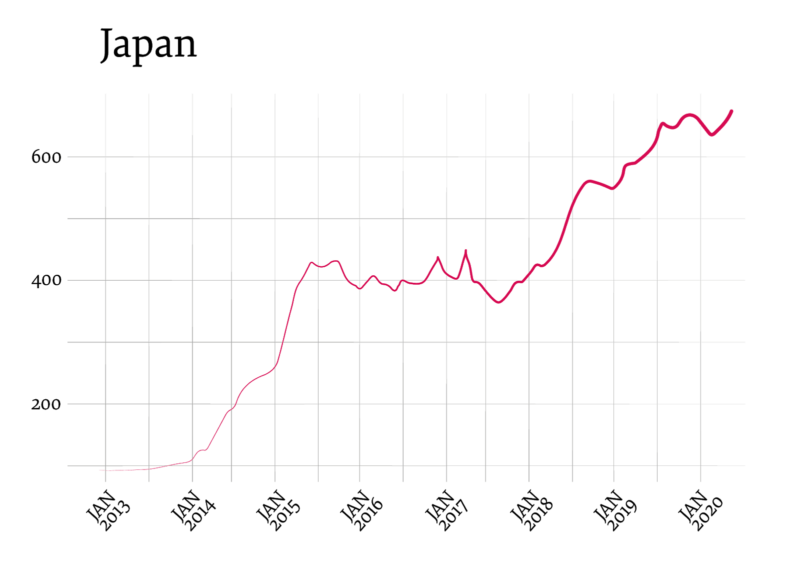 This unparalleled level of interest was something that no one saw coming, after all, Japanese whisky has been around since the early 1900s, and just 20 years prior to the whisky boom the industry was in steep decline, with the 1980s now being rather unaffectionately known as the ‘silent period’.

At this time, there was a distinct lack of interest in Japanese whisky at home, with Shochu and Sake dominating the drinks market, and only a tiny portion of drinkers in other parts of the world were even aware of its existence.

The period resulted in serious financial discomfort for a lot of the country’s whisky producers, and the effects this would have on Japanese whisky are still evident today.

One of the major impacts of the silent period was that a number of Japanese distilleries were forced to mothball and eventually close their doors. Hanyu, Kawasaki, Shirakawa and Karuizawa were the most notable of the victims. Each of these distilleries managed to struggle through the ‘80s and continue producing spirit into the ‘90s, but the financial toll that the silent period had taken on them was simply too much.

One by one, they were mothballed and eventually closed in the early 2000s, with most of their stock being sold off to private investors.

The sad fact of the matter is that just as the distilleries were closing their doors, Japanese whisky was growing in popularity, thanks to expressions of Yamazaki and Hibiki picking up a number of awards at spirits competitions around the world. The boom was imminent and people everywhere were waking up to the qualities that Japanese expressions possess, but it was too little too late for the likes of Karuizawa.

While these closures were devastating at the time, for both the local communities and all of those that had been involved in the production of whisky at these sites, they would eventually lead to the creation of one of the strongest, most investable and most prized whisky markets in the world today – Rare & Old Japanese Whisky. 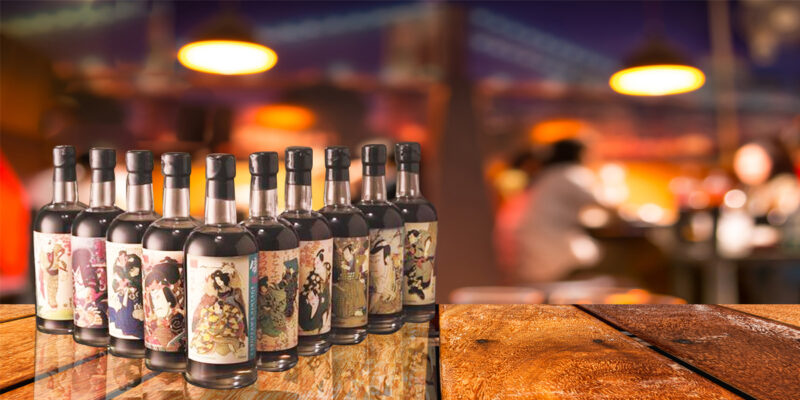 The effects of the silent period of the 1980s and the Japanese whisky boom of the early 2000s combined to create a huge surge in the price of expressions produced in Japan, resulting in strong investment opportunities and an active secondary market.

Due to the lack of interest in the product in the ‘80s, most distilleries drastically decreased production, after all, why produce something that no one is interested in buying?

This meant that when Japanese whisky exploded onto the international market, and demand soared, supply soon began to dwindle. This deficit between supply and demand did what it always does, in any market in the world – it pushed up prices. Not only was Japanese whisky now becoming more popular by the day, but by 2010, it was also becoming increasingly hard to find and much more expensive.

Seeing the exponential growth in demand, the private investors who had taken on the remaining stocks from Japan’s now closed distilleries saw an opportunity. They began bottling the remaining liquid and immediately these unique, super-limited whiskies caught the eye of whisky-fans, collectors and investors everywhere.

Suddenly, casks of single malt from Japan’s lost distilleries were being bottled and sold for never-before-seen fees, with Karuizawa and Hanyu expressions selling for particularly high prices.

As a result of the whisky boom, and the resultant lack of availability of both new and old bottlings, customers began turning to the secondary market, and before long, new records were being set by Japanese whiskies at auction houses everywhere.

Old & rare Japanese expressions were suddenly the most talked about and sought after whiskies in the world, and none more so than those from the legendary Karuizawa distillery.

Karuizawa whisky is quite unlike any other that has been produced in Japan, regularly being likened to Scotch because of its rich, heavy-bodied, and often sherried, style. This has much to do with the location of the distillery and the lengthy maturation periods that most of the distillate was given.

Karuizawa sat high in the Japanese Southern Alps, a place with a complex micro-climate that has allowed the town to play host to both winter and summer Olympic events. Unlike Scotland, where the humidity and temperatures remain fairly consistent, Karuizawa experiences massive swings in both, with the average temperature going from 2C in winter, to 25C in summer.

While the consistent climate in Scotland results in a steady loss of ABV – known as ‘The Angels’ Share’ – the conditions at Karuizawa help to maintain a much higher ABV than normal, which in turn leads to a more concentrated flavour profile.

It was for this reason that Karuizawa liquid was originally predominantly used in blends. It was perfect for providing body and depth to blended expressions that were perhaps lacking in a bit of character. It was only once the distillery closed its doors that the idea of buying, or drinking, single malt Karuizawa was truly born.

It is a combination of the unique character and the extremely limited number of remaining casks that has led the distillery’s whiskies to become so investable and collectable in recent years, with bottles selling for increasingly lofty fees at auction.

In March 2020, a bottle of Karuizawa 52 yo (1960) Zodiac Rat Cask #5627 sold for US$435,273 at Sotheby’s London, making it the most expensive bottle of Japanese whisky ever sold at auction at that time. In May, Sotheby’s Hong Kong held a two-week long auction spotlighting bottles from the closed Karuizawa distillery, with the most expensive being a single decanter of Karuizawa 52 yo, 1965, titled ‘Streams of Time’, which reached a sum of $61,000.

It’s clear for all to see that the appetite for Karuizawa whisky is as strong as ever, further highlighted by the distillery growth figures in the WhiskyStats indices.

The distillery experienced an astounding initial burst of growth, to its all-time high in mid-2015, growing at a much faster rate than Japanese whisky as a whole, which itself was experiencing a boom. Any initial growth period like that is sure to level out at some stage, and January 2018 saw a slight dip. Since then however, the value of Karuizawa has been steadily increasing once more – it now sits second top of the whiskystats.net distillery indices at 378.56, behind only Rosebank (388.44) and ahead of the likes of Hanyu (362.37), Yamazaki (326.48) and Macallan (288.89).

This, combined with the aforementioned recent auction results and the increasingly limited availability of bottles, suggests that it will likely continue on an upward trajectory, with interest intensifying going forward.

Covid-19 and Investing In Whisky

Of course, 2020 has been unlike any other year in living memory for most of us thanks to the Covid-19 pandemic that has rocked the world, and indeed the markets, which have, for the most part, plummeted across the board.

With this in mind, investors around the world have been looking for stable assets to add to their portfolio. So how does rare & old Japanese whisky fare in this regard? 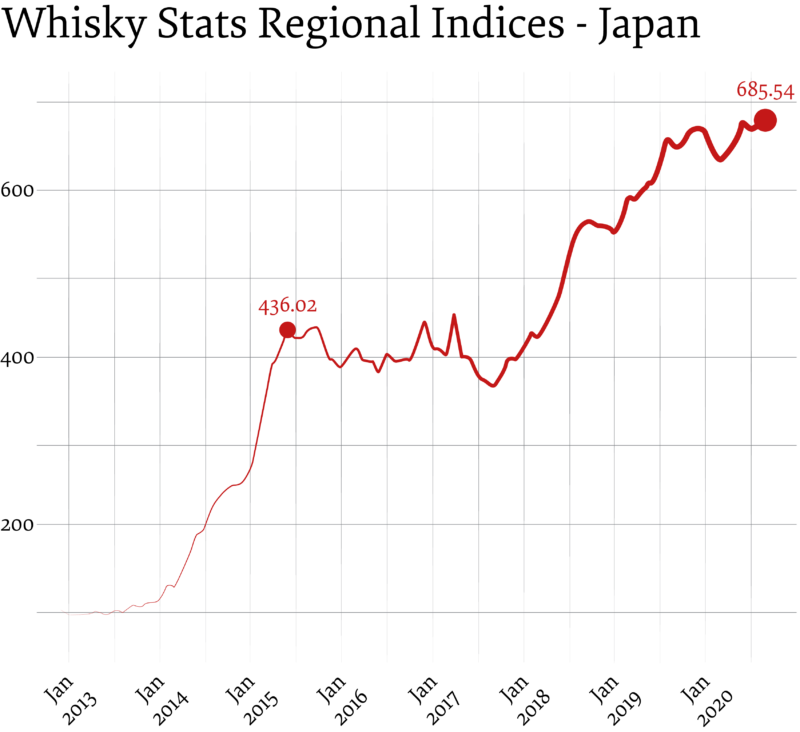 What we are hearing from experts in wealth management and preservation is that tangible assets, including luxury investments such as whisky, prove a more stable investment than more traditional choices, such as stocks and bonds, throughout periods of economic downturn. This is not to say that there will not be periods of short-term volatility, but there is considerable confidence that the market will show stability, and growth, in the longer term.

This is highlighted by the continued growth of Japanese whisky as a whole, which initially dipped to 640.6 (in the whiskystats.net indices) in March of this year, before recovering to an all-time high of 685.54 in September.

With that mind, it’s fair to say that the increased interest that was shown in Karuizawa at auction pre-Covid is something that we can expect to return, and perhaps exceed, in the near future, with the market also likely to experience an influx of new investors.

Daniel Lam, Spirits Expert at Bonhams HK, agreed with this sentiment. He stated: “From what we’ve seen in the past 8 years, with the demand for Japanese whisky, and even this year under the Covid lockdown we are still seeing people collecting, buying and drinking, the market is going to be very healthy in the future. We are also seeing a new group of people collecting Japanese whisky, it’s becoming a trend.”

The added possibility of a new Karuizawa bottling or two in the near future will only strengthen interest, keeping the market for old & rare Japanese whisky as strong, and as active, as ever.