It’s Day 4 of our 10 day dekanta anniversary countdown, and today we’re honouring one of Suntory’s most popular distilleries. Yesterday, we looked at Nikka Miyagikyo (if you missed that you can catch up right here), and we hope you all grabbed yourself a nice bottle at a discounted price.


Today, we’re looking at the Hakushu distillery, Suntory’s ‘Forest Distillery’. They’re known for producing a clean, crisp and refreshing spirit that embodies the distilleries beautiful mountainous surroundings and have won a number of prestigious awards for their excellent expressions. Without further ado, let’s get into it.

Founded in 1973, Hakushu is the highest operational distillery in Japan, towering over its competitors at a height of more than 2000 feet above sea-level. It sits in the middle of a thick mountain forest, hence its nickname – ‘The Forest Distillery’.

Hakushu is a Suntory owned distillery and, while not quite as globally famous as Yamazaki, the quality of single malt whisky produced here is nothing short of outstanding.

Hakushu is known to use one of the most pristine water supplies in the whole of Japan, drawn from reserves at the base of Mount Kai Komagatake. The water here has a very low mineral content and is much softer than that found elsewhere in the country, and this helps the distillery to create a refreshing, crisp and well-balanced range of expressions.

Many of the whiskies created here are lightly peated, giving peat lovers the perfect ‘in’ to the world of Japanese whisky.

On top of receiving the recognition of critics, experts and fans around the world, the distillery’s expressions have also picked up a whole host of awards that highlight the effective processes and expertise of those behind their whisky production. 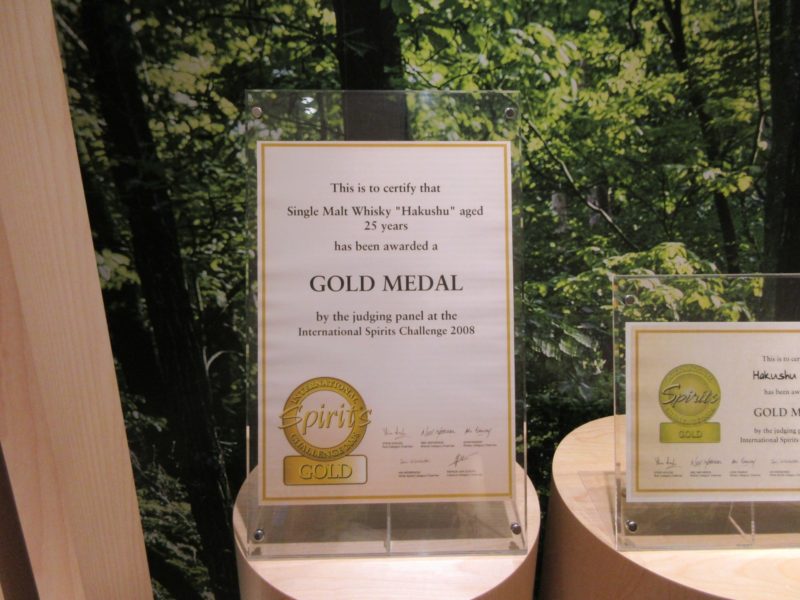 For years now the distillery has been shining at international spirits competitions and has picked up a number of World Whiskies Awards into the bargain.

Their 12 Year Old was named “Best Japanese Single Malt Whisky 12 Year and Under” at 2016’s version of the annual award ceremony, while their 18 Year Old won both a Double Gold and a Gold medal at the San Francisco World Spirit Competition 2015 and the International Spirits Challenge 2013/2014 respectively.

It’s the smooth, elegant freshness of Hakushu whisky that seems to wow judges the world over, with the gentle whiffs of peat smoke combining excellently with freshly sliced apples, gently spiced oak and subtle floral hints. Their drams are truly masterful, but perhaps none more so than the outstanding 25 Year Old. This premium Hakushu single malt has now picked up a total of four World Whiskies Awards, including twice being named “World’s Best Single Malt”, most recently earlier this year.

If you want to try a truly outstanding Japanese whisky that you’re sure to remember for some time to come, you really can’t go wrong with the Hakushu 25 – the world’s best single malt whisky.

For the next 24 hours, you can save big on some of the finest Hakushu expressions available, simply choose your bottles and enter promo code “HAKUSHU15” to get 15% off your entire order.

15% OFF ALL HAKUSHU BOTTLES