2020 has been one of the most difficult and eventful years in recent memory, with the Covid-19 pandemic sweeping the globe and turning our day-to-day lives upside down. It has thrown up challenges that no one ever saw coming; from being locked in our homes week after week; to learning to enjoy socially distanced meetings with friends; and developing the skills to have important conversations with people through perspex screens.

Thankfully, this crazy, chaotic year has also brought some positives with it. For example, people have finally been taught how to queue properly! Let’s be honest, no one enjoyed having Karen and her seven kids relentlessly smash their shopping trolly against our heels while we waited to be served at the supermarket. Nor did we like having ‘Old Jeff’ cough directly into our ear at the same time. It was a combination we could all live without and thankfully that is no more, at least for now. Something about clouds and silver linings springs to mind.

All jokes aside though, 2020 has delivered some truly brilliant expressions of Japanese whisky that have given everyone something to get excited about, in a year that has been seriously lacking in such pleasures.

From first single malt releases from Japan’s newest distilleries, to exciting, unique expressions from the country’s well-established whisky giants, there has been plenty on offer to keep us entertained and remind us that, even though Covid is still at large, there is still a plethora of beauty in the world that can be discovered from our own homes.

Today, we’re looking at the best Japanese whisky of 2020 so far. Each of the bottles we’re talking about has struck a chord with us here at dekanta and we know that many of our customers have enjoyed them too. They’re the highlights of the year in whisky so far and showcase the rapidly expanding Japanese whisky landscape, with more and more new options becoming available to fans by the day.

So without further ado, let’s take a look.

The Mars Tsunuki distillery was built in 2016 as Hombo Mars’ second operational distillery in Japan, after Shinshu. Until this year, Tsunuki had released no single malt whiskies, however you may have spotted their name on some Shinshu releases. That’s because the Tsunuki cellars have been used to age Shinshu whisky on a number of occasions, but in April of this year we finally got a first Tsunuki single malt to explore, and it was just as good as we’d hoped.

Mars Tsunuki The First was Distilled in 2016/17 and laid to mature in bourbon barrels. The distillery workers then tasted the whisky along every step of the way, before deciding that they had it just right for bottling in 2020.

It comes in at 59% ABV and brings citrus fruits, vanilla and fresh bread on the nose, followed by more sweet fruits, grassy notes and gentle spices on the palate. The finish is of medium length with a soft sweetness and cracked black pepper.

It’s a truly accomplished expression that, despite its young age, has plenty to explore, for the beginner and aficionado alike. With two distilleries now up and running, we’re excited to see what Mars brings to the table in the years to come. We’ll no doubt be seeing some more interesting single malt releases from Tsunuki and Shinshu in the near future, but could we see some exciting blends too? We’re certainly hoping so. 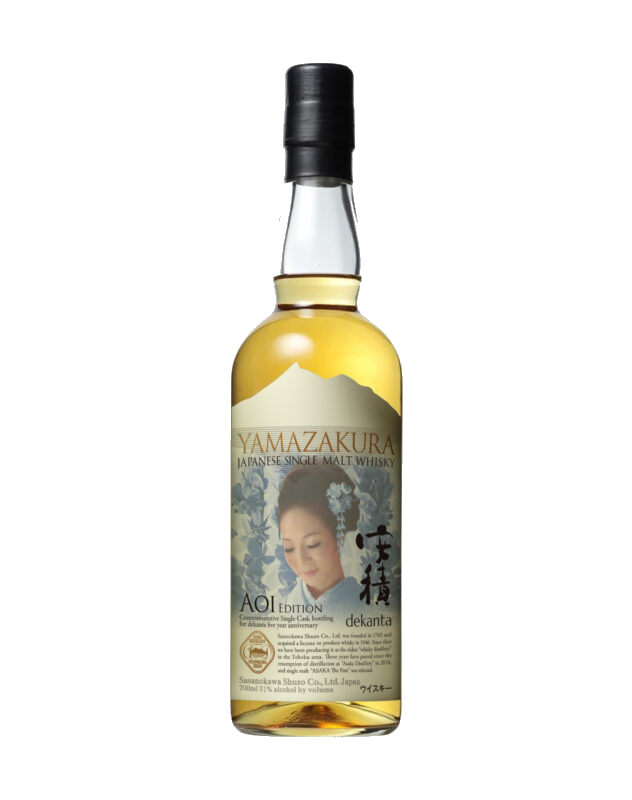 Much like Mars Tsunuki, the Asaka distillery is one of Japan’s newest whisky producers. Founded by Sasanokawa Shuzo in 2015, it was built deep in the mountains of Fukushima.

In the first few years after its birth, we were treated to a number of new-make expressions from Asaka, allowing us to sample their spirit’s journey to becoming whisky. Despite only being new-make spirit, the bottlings impressed everyone in the whisky industry, and soon we were all very excited for their first single malt release.

When it arrived, it was nothing short of brilliant. The Asaka The First brought unique character, delectable notes and a clean, crisp mouthfeel to your glass.

At dekanta, we were so impressed with this delicious single malt, that we chose a cask from the distillery to be bottled in celebration of our 5th anniversary in June. This was a very important milestone for us, signalling that we have been delivering quality bottles of Japanese whisky to all corners of the globe for half a decade, so we didn’t take the decision lightly.

The Asaka Aoi Edition was distilled in 2017 and matured in a first-fill bourbon cask for 3 years before bottling in 2020. It brings an astounding array of notes to the table that allow us to peek behind the curtain of the Asaka distillery and experience first hand the passion, knowledge and expertise of those working there.

The nose brings a burst of citrus fruits, freshly sliced apples, gentle oak and hints of pear drops, before making way for vanilla ice cream, salted caramel, creamy toffee, candied lemon peel and gentle pepper spice on the palate. The finish is medium length and tops the whole thing off in style with another vibrant burst of juicy fruits, baked apples and gentle spiced oak.

Only 343 bottles were produced, and much fewer remain today. 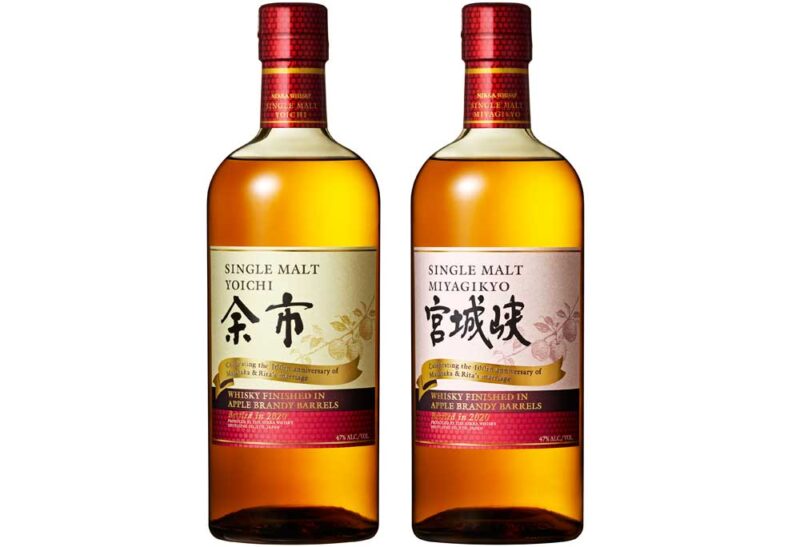 Not only did 2020 mark our own 5th anniversary, it also marked 100 years since the marriage of Nikka founder and Japanese whisky legend, Mastaka Taketsuru, and his beloved Scottish wife, Rita Cowan. As you can imagine, this a milestone that Nikka wanted to mark in style, and so they did.

In March, they released two stunning single malt whiskies, produced at their world famous Yoichi and Miyagikyo distilleries, that had been given a rather unique finishing period in casks that had previously housed apple brandy.

Both were exquisite in their own right, with the finish having subtly different effects on the spirit from each of the distilleries.

The Yoichi expression was fuller bodied and slightly smoky, with gentle notes of freshly sliced apple, buttered toast and hints of cinnamon lingering in the background. While the Miyagikyo single malt was altogether softer and more floral, with the notes from the cask taking up a much more prominent position in the spirits’ flavour profile.

Both were huge hits with fans everywhere and with only 6,700 (Yoichi) and 6,450 (Miyagikyo) bottles produced, supplies are now running low.

Another new distillery, another stunning whisky. The Akkeshi distillery, situated on the gorgeous northern Japanese island of Hokkaido, has been distilling whisky since 2016.

The distillery founder, Keiichi Toita, chose the island as the location for his whisky venture thanks to his love of Islay single malts. The climate on Hokkaido is both cool and wet, and so conditions are perfect for producing a spirit akin to those made on Scotland’s most famous whisky producing island.

After releasing new-make spirit expressions for years, in early-March, they finally released their first single malt – the Akkeshi Sarorunkamuy.

Translated as “Japanese red crowned crane”, an animal synonymous with the meaning “God of the Wetlands”, it was made from whisky distilled in 2016 and matured in bourbon, red wine, sherry and Mizunara casks.

On the nose, it brings a wealth of fruity notes, including red berries, poached plums and gentle citrus notes that gradually come through in the background. Gentle wood spices and essence of vanilla also make themselves known as you continue to nose and a sprinkling of sea salt helps to cut through the fruity sweetness.

The palate brings yet more fruity notes, but here you’ll also find subtle spices building in the background, including gentle black pepper and hints of sandalwood from the Mizunara cask.

Then comes the lingering finish, that is medium length and brings more spices to the table, with cinnamon, gentle nutmeg and a little more pepper being backed up by just a whiff of peat smoke and another pinch of sea salt.

It’s a fascinating, well-rounded whisky that comes packaged inside a uniquely shaped bottle, with long neck and stubby cylindrical base, that has become something of a signature for the distillery’s releases.

In recent times, much has been made of the on-going Japanese whisky shortage, with Suntory and Nikka being the two hardest hit producers in the country. Despite struggling to keep up with demand, both managed to release some delicious expressions this year, much to the delight of whisky fans everywhere.

Suntory surprised us all back in March when, out of nowhere, they announced the latest edition in the hugely popular Essence of Suntory range. Volume 4: Sakura and Rice, brought two new expressions that were like nothing we have seen before in the world of whisky.

The “Rice” from this eclectic duo was, to the delight of many, a genuine rice whisky, created using a unique process that created a clean, slightly spicy expression that brings light notes of peaches, fruity incense, hints of ginger and a moreish juiciness.

The “Sakura”, on the other hand, was perhaps less surprising but still relatively unique nonetheless. Distilled at Suntory’s grain distillery, Chita, in 2000, it was then aged in white oak barrels for around 15 years before being transferred to Sakura casks (cherry blossom wood) for a three year finishing period, totalling 18 years of maturation.

Sakura wood has been used with increasing regularity in the Japanese whisky industry and, in this case at least, it has had profound effects on the whisky.

It brings cherries, mochi and whiffs of Sakura flowers on the nose, before lychee, white grapes and sweet honey dance on the palate. The scent of cherry blossom returns on the finish and lingers for a long time, while gentle wasabi spice hangs around in the background. All of this is delivered with a smoothness only found in the most carefully crafted expressions, making this a shining example of top quality single grain whisky.

As you can see, 2020 has been a very busy year thus far for Japanese whisky, with a number of excellent expressions hitting the market. Unfortunately, we could only include so many of these today, and it was very difficult to leave some out, such as the Nagahama distillery’s first single malts and a host of new single cask and blended releases from Ichiro’s Malt and Chichibu.

Despite the on-going pandemic, and all that it entails, these stunning whiskies serve as a reminder that there is still plenty of beauty in the world just waiting to be explored, even if we have to do it from the comfort of our own homes.