Japanese whisky will always be our pride and joy, but as we stand on the edge of Japan and look West towards Asia, there’s a whole lot of great whisky being made. We’re always up for a bit of exploring, so we decided to venture out and meet the people behind these amazing Asian whiskies.

The air is thick and warm coming off the plane in Goa, India. Whisky matures fast here, as the heat and humidity opens up the wood, allowing the liquid to come into deeper contact with it.

South Goa, where the Paul John distillery is located, is tranquil and beautiful. The long, white Cavelossim beach is just 20 minutes away, along which luxury 5-star resorts stand majestically. Where the river Sal meets the Arabian Sea, palm trees, blue waters, and, of course, whisky, make the area one of the most attractive in India. 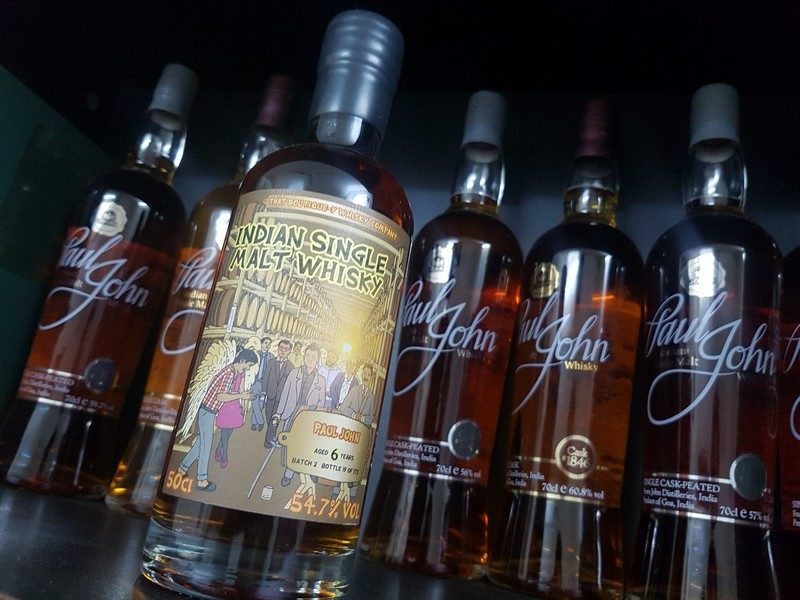 At the distillery, we’re met by Michael D’Souza, Paul John’s master distiller. Despite being responsible for India’s most world-renowned single malt whisky, the man is modest and kind as he tells us the distillery’s story. Named after Indian entrepreneur and founder, Paul John, the Bangalore-based company has been around since 1996 making a variety of spirits including rum, whisky, and brandy.

The Paul John single malt distillery, however, was built in 2008 in Goa, with the first single malt release reaching the UK in 2012. While the company had been making blended whisky for years, the premium move into single malts brought the distillery onto the global whisky stage.

Paul John’s unpeated expressions (the peat used is from Scotland) are 100% Indian, as all the ingredients used are sourced domestically. Six-row barley is sourced from the North, near the Himalayas, while the water comes from Goa. Different from the more commonly used two-row variety, six-row barley brings about a unique character in the distillate and has come to define the category. Lively, vibrant fruit and a touch of spice are delivered, notes which are then affected by the chosen wood.

As we walk the offices, towards the distillery, D’Souza explains the construction which is taking place. The new, large visitor’s centre is almost complete, which will allow visitors to experience all the distillery has to offer.

The site currently has two warehouses. One is above ground, now holding 6000 casks, where the whisky matures faster. The underground warehouse, which holds around 4000 casks, allows the whisky to mature slowly, surrounded by cooler temperatures. Above, the whiskies grow vibrant and intense. Below, they come to be more robust. D’Souza mentions that whisky from Paul John will never exceed 10 years of aging. The impact of the heat and wood are so swift, that passing the decade mark would make the oak’s influence too strong.

Underground, the air is filled with alcohol, as we get to sampling casks. The 7 year-old bourbon casks are smooth, fruity, and vibrant, but the sherry butts win us over, as the immense spice, pepper, and tropical and dry fruits burst out onto the palate. Finally, D’Souza allows us to try one of his own private casks, a peated, sherry-aged single malt, which left us speechless.

Pleasantly surprised by the amazing flavours, we make our way to the large copper stills, which were made by a local, Indian company. The two sets stand shining against the Indian sun and, ruining the moment, I pull out my phone and snap a few photos. After all, if I don’t have photos, was I ever there?

The tour comes to a close, we enjoy a few more drams and hit the road again. D’Souza waves goodbye, and probably sets off to prepare for his trip to the US scheduled for the following day. Paul John only entered the US recently, and the reception has been great.

The Indian whisky scene is established and growing, and we’re excited to be a part of it moving forward. But, more on that later! Stay tuned for our next adventure.