As you can see from our home page, we’re honored and thrilled to be able to offer the new Karuizawa Shibari Collection, a quartet of 35 Year Old sherry cask-aged whiskies whose bottles are an homage to the Japanese art of rope bondage. Limited to 45 sets — a mere 180 bottles — we’re using a ballot system to ensure that everyone who wants a bottle (or a set!) has a fair chance at getting one.  But in case you’re wondering why demand is so intense for these particular bottles, here’s a little background. 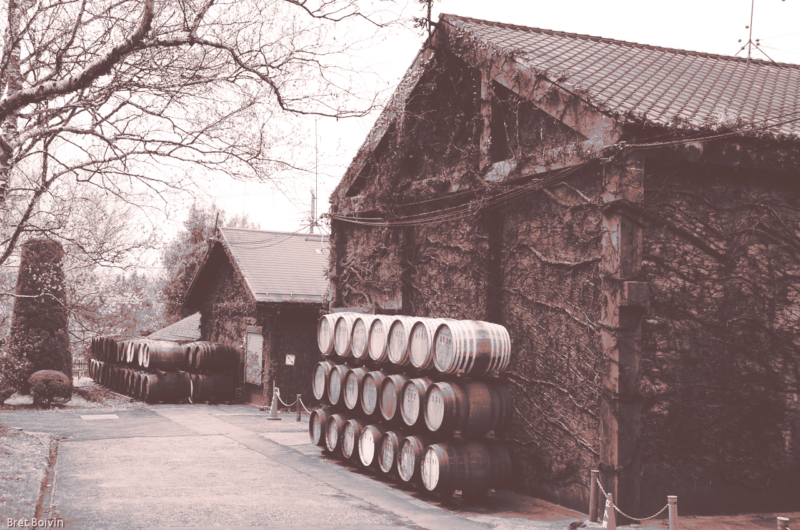 Karuizawa is not yet a household name among whisky drinkers.  But among Japanese whisky connoisseurs, collectors, and investors, mention of the name sets the pulse to quickening.  Imagine a combination of, say, the Macallan and Port Ellen in the Scotch whisky world and you’ll have some idea of just how monumental and desirable a brand Karuizawa is. Like the Macallan, it’s a trademark of quality — the Karuizawa name on the bottle is an indicator that the liquid inside is the créme de la créme of Japanese whisky.  But like Port Ellen, Karuizawa is a “ghost distillery.”  Closed since 2000, during a downturn for the global market, the distillery is no longer producing new whisky, but it lives on through new releases laid down years and decades ago, some of which continues to age today. Each new bottle that comes to maturity and is released into the world is part of a finite and dwindling supply, making it that much more precious — and valuable.

Located at the foot of Mount Asama, an active volcano, the Karuizawa distillery opened in 1955. At 850 meters above sea level, it was the highest distillery in Japan. The melting snow from the mountain provided an excellent water source in the melting snow, and the chilly climate was conducive to optimal whisky production and aging.  Using imported Scottish barley and (mostly) ex-sherry casks, Karuizawa’s small pot stills and ivy-covered warehouse made a relatively small quantity of whisky, but what it produced was known as some of the finest Japan had to offer. Unfortunately, that wasn’t enough to save the distillery, which was closed in 2000 and completely dismantled in 2012.  With the explosive interest in high-end Japanese whisky that’s taken place in recent years, Karuizawa has belatedly assumed its rightful place among the world’s great whiskies.

One Of Japan’s Most Sought-After Whiskies

Collectors have taken notice of Karuizawa’s quality and collectibility.  Rare bottles have seen a dizzying upward trajectory in value in recent years. A bottle of Karuizawa “The Archer,” laid down in 1960 and aged for 52 years, fetched more than $140,000 at auction last year, making it the second most expensive bottle of Japanese whisky ever sold.  And in April 2017, a collection of 296 Karuizawa bottles — almost every release from the distillery’s history — sold for more than $1 million cumulatively. So while $14,500 for a bottle of Karuizawa’s new 35 Year Old Shibari Collection isn’t exactly a trifling sum, it’s a good guess that we’ll soon see it getting higher prices at auction and on the secondary market.

The Karuizawa Shibari Collection — And How To Acquire A Bottle

Demand for Karuizawa whiskies is, needless to say, greater than the dwindling supply.  How to solve the problem? In 2018, when dekantā acquired a limited set of Karuizawa bottles inspired by the cities of Japan, we decided to institute a ballot system. Would-be customers would enter their names in a drawing, and those who were selected would get to purchase a bottle.  The idea turned out to be a roaring success, with more than 3,500 entries placed for the 150 bottles available.

For those who missed out on last year’s ballot — or for lucky winners who want to add another bottle to their collection — this year’s Karuizawa offering, the Shibari Collection, is a piece of history, a stunning work of art, and, should you decide to open the bottle, a staggeringly good whisky.  Each of the four bottles is represented by a different color (Red, White, Blue and Black) and a different type of knot pattern, representing the finest expressions of the Shibari form of rope bondage. The Red, White and Blue bottles are at 60.6% ABV, while the Black comes in at a slightly lower 56.5%.  At dekantā, we offer many Karuizawa whiskies, but these 35 Year Olds, aged in sherry casks and bottled at cask strength, are not just the pinnacle the brand, but they represent the apex of Japanese whisky in general. It simply doesn’t get better than this.