There’s just over a week to go until the big day and the hype and excitement levels are reaching new heights. It’s Day 9 of our Christmas Countdown and today we’re looking at a couple of whiskies that have burst onto the market and gained recognition for their delightful flavour compounds created by some innovative thinking and wood management.

The forward thinking folks behind these expression tread new ground with their choice of cask and it has more than paid off, with whisky fans like you and I lapping up their unique and interesting releases. Of course, we’re talking about Kamiki.

Without further ado, let’s get into today’s whisky.

The story of Kamiki, translated as “God’s Breath” in English, started at the Omiwa Shrine at the foot of Mount Niwa. The shrine is famous in Japan as a place where alcohol is offered as a blessing and those at Kamiki decided to honour this tradition, along with Japanese craft and artisanship, within the World Blended Whisky category.

To create their expressions, the Kamiki master blenders imported some of the finest single malt whisky from around the world, blending it with top quality Japanese malts before adding Japanese water and maturing in their casks of choice.

These methods are not unheard of in the world of whisky, with world blends growing in number and popularity over the past couple of years, particularly in Asia where the whisky regulations allow this form of blending to take place. The wood that Kamiki used, on the other hand, was unheard of – having never been used for whisky maturation before.

The first release, the Kamiki Blended Whisky, had the honourable pleasure of being the first whisky in the world to be matured in Yoshina Sugi, or “Japanese Cedar” in English.

This wood is not easy to work with so selecting it for their first release was a brave move.

The depth of the bold flavours imparted on the whisky are like nothing we have ever tasted before, with some comparing it to the smells of a freshly cut Christmas tree. This unique but quite outstanding flavour is backed up by honey-dipped apricots, peaches and a small whiff of campfire.

A range of spices, including ginger and nutmeg, also come to the fore in this all-together Christmassy whisky. It’s a real delight that shines among many of the other releases this year and it’s one that every whisky-lover should try at least once.

It’s not just us saying that either. It scored an impressive 95 points at the Ultimate Spirit Challenge 2018, higher than any other Japanese entry. 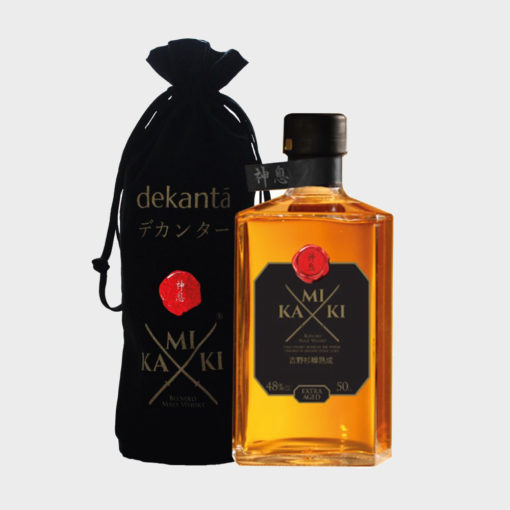 The Kamiki Intense is the brand’s second release and a dekanta exclusive. This one somehow managed to outshine its predecessor, picking up a number of prestigious awards including a Double Gold at the San Diego Spirits Festival 2018.

Much like the original blend, the Intense is finished in Japanese Cedar Wood, but where this one differs is when it comes to the length of that finishing period.

Rested for longer than the first release, the distinctive smell and flavours are even bigger and bolder in this one with the wood having an even more profound effect on the spirit.

Those piney smells punch you in the nose again upon your first sniff and from there it only gets stronger. That’s not to say this whisky isn’t finely balanced – it is. Notes of honey, caramel, toffee apples, citrus fruits and a little smoke are apparent on the nose and palate, but that unique aroma of the Japanese cedar lingers in the background, reminding you that you’re sipping a Kamiki.

These two masterful blends are a joy, with their warming, spicy and smooth characteristics and so a place in our Christmas Countdown is no more than they deserve.

If Japanese Cedar Wood doesn’t do it for you (it is an ultra-unique flavour after all), here are some alternative suggestions to warm your cockles this winter: