The delicious, world-beating Yamazaki 25 Year Old was released all the way back in 1999, a whole 20 years ago now. The premium single malt whisky first burst onto the scene in celebration of the Yamazaki distillery’s 100th anniversary, and despite its higher than most price point, it was lauded by many in Japan, but was rather inaccessible for those outside of the country, as was the case with most Japanese whisky expressions at the time.

Since then, Japanese whisky has grown exponentially in popularity, hitting headlines for its quality, beauty, the stories behind the expressions and some of the crazy amounts that the rarest bottles, we’re looking at Karuizawa and Hanyu in particular here, have fetched at auction.

This boom has allowed millions around the world to experience hundreds and thousands of incredible expressions, and whisky critics have been as impressed with the creations as the whisky-loving fans like you and me.

Arguably, besides the aforementioned silent distilleries, Yamazaki has become the most popular and sought after of all Japanese whiskies. Their 12 Year Old has experienced huge success, as has their 18, and indeed the 25 Year Old that we are honouring today.

All of these expressions have picked up a number of awards at international spirits and whisky competitions around the world, but the Yamazaki 25 has perhaps received the most prestigious awards of them all. 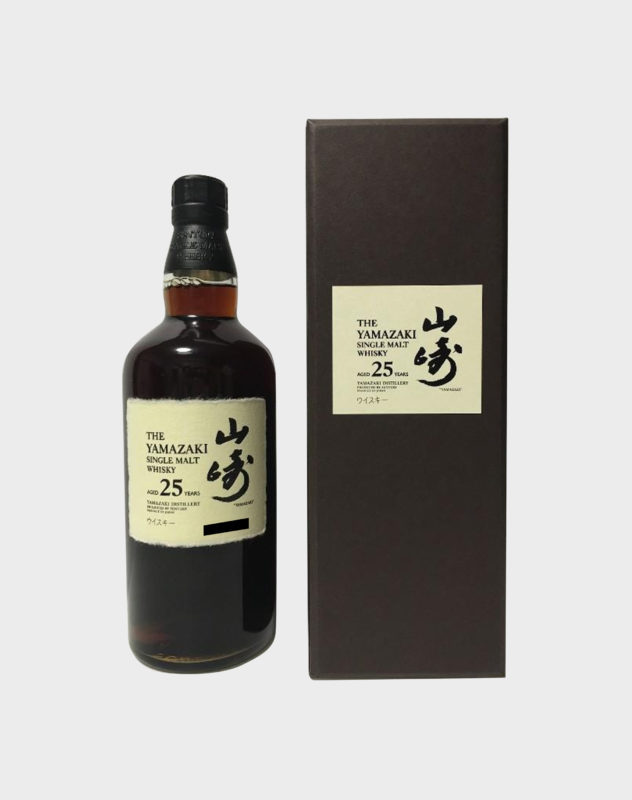 In 2012, a whole 13 years after it was first released, the incredible Yamazaki 25 was named the “World’s Best Single Malt Whisky” at the annual World Whiskies Awards, really putting it on the map. From then on, it went from strength to strength, leading it to become one of the most sought after and prized single malt whisky expressions in the world today.

In 2015 it picked up yet more awards, winning double gold at the San Francisco International Wine & Spirits Competition, while also being named Best Japanese Single Malt 21 Years & Over at the World Whiskies Awards.

The numerous awards, combined with the fact that only 12,000 bottles of this premium expression are made available each year, has not only lead this whisky to be highly sought after, but also made it extremely rare, as fans everywhere clamber to get their hands on a bottle.

What Makes The 25 So Special?

So what’s so great about the Yamazaki 25 Year Old? The most apparent thing, to both experienced drinkers and newcomers, is it’s unrivalled balance, poise and smoothness. There is not a harsh note to be found in this exquisite bottling, and the huge range of intriguing flavours on offer compliment each other in a way that only true masters of whisky could make possible. And those at Yamazaki have proved time and again that they are certainly that.

On the nose, sweet and sticky fruits, such as figs, poached plum and pears baked in red wine dance with subtle smoke, fresh leather and gentle herbs, getting along like they have been best friends since birth.

Then there’s a gentle nuttiness, rich oak and a full mouthfeel that coats your palate before making way for some of the most carefully measured spices including cinnamon and nutmeg. At this point the whisky takes it up a level, bringing more spice and a richness that is by no means overbearing – yet another achievement only found in the best of the best single malt whiskies.

The finish is long and rich, the perfect way to top off this exquisite dram, with more baked plums sweet talking the elegant dark chocolate that feels as though it was sourced from France’s best chocolatier and melted directly into the cask.

It’s a perfectly harmonious whisky that provides a reminder of what is possible with hard work, expertise and dedication in today’s crowded whisky world and one that will go down in the history books long after it’s gone.

Today, the Yamazaki 25 can be extremely hard to get your hands on. Every single year, aficionados wait with baited breath for the latest batch and they tend to be snapped up in record time.

In the past year or so, many have expressed concern for the dram’s future, as the Japanese whisky shortage looms large and many age-statements are removed from production lines, but as far as we are aware, there are no immediate plans to shelf the 25 Year Old – PHEW!

It may be the case that each year’s batch gets smaller in size, we will just have to wait and see, but for now, in the year of Suntory’s 120th anniversary, and a whole 20 years after it first hit the shelves: The King Is Not Dead – Long Live The King.