Awamori has been produced in Okinawa since at least the 15th century. Originally introduced by Thai traders, Awamori is still made using imported Indica long rice from Thailand. However, this does not mean that the drink is similar to something you may find in Thailand, as the Okinawans made a substantial contribution to the distillation process; they incorporated and invented new techniques. It has long had a reputation for being an excellent alcoholic drink; in fact, during the ages where Okinawa was an independent kingdom, it often sent Awamori as tribute to its powerful neighbours of China and Japan. Evidently, this worked quite well, as both the Japanese and the Chinese were content to leave the islands independent, providing they received their share of the local booze.

This ball-shaped bottle, made by the award winning Nankijin brewery contains quality Awamori, with an alcohol content of 25% ABV. It is best enjoyed chilled without anything added to it. 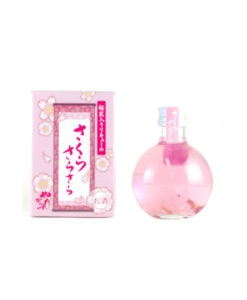