Literally towering above its competitors, Hakushu is the highest operational distillery in Japan, with an altitude of more than 2000 feet above sea level. Rather like its Scottish counterpart, Dalwhinnie (the highest distillery in Scotland), whose altitude is said by some to play a huge part in the character and style of its spirits, Hakushu produces a wonderfully balanced malt of the highest quality.

The water source bears almost as much importance as the altitude, with the distillery drawing its reserves from the foot of Mount Kai Komagatake, a horse-shaped peak in the Kai province. The water is softer and has a much lower mineral content than the waters used in other Japanese distilleries, which perhaps adds to the significantly different style of spirits produced here. The impressive twin towers of the distillery’s Visitor Centre and Museum of Distillation pay homage to the time when the site played home to two separate distilleries that later joined forces in 1981. Perhaps the walkway between the two signifies the meeting of minds and styles that Hakushu is renowned for, with the proprietary 10, 12 and 18 year old single malt bottlings not only reflecting a wonderful range of flavours, but picking up a number of awards to boot. 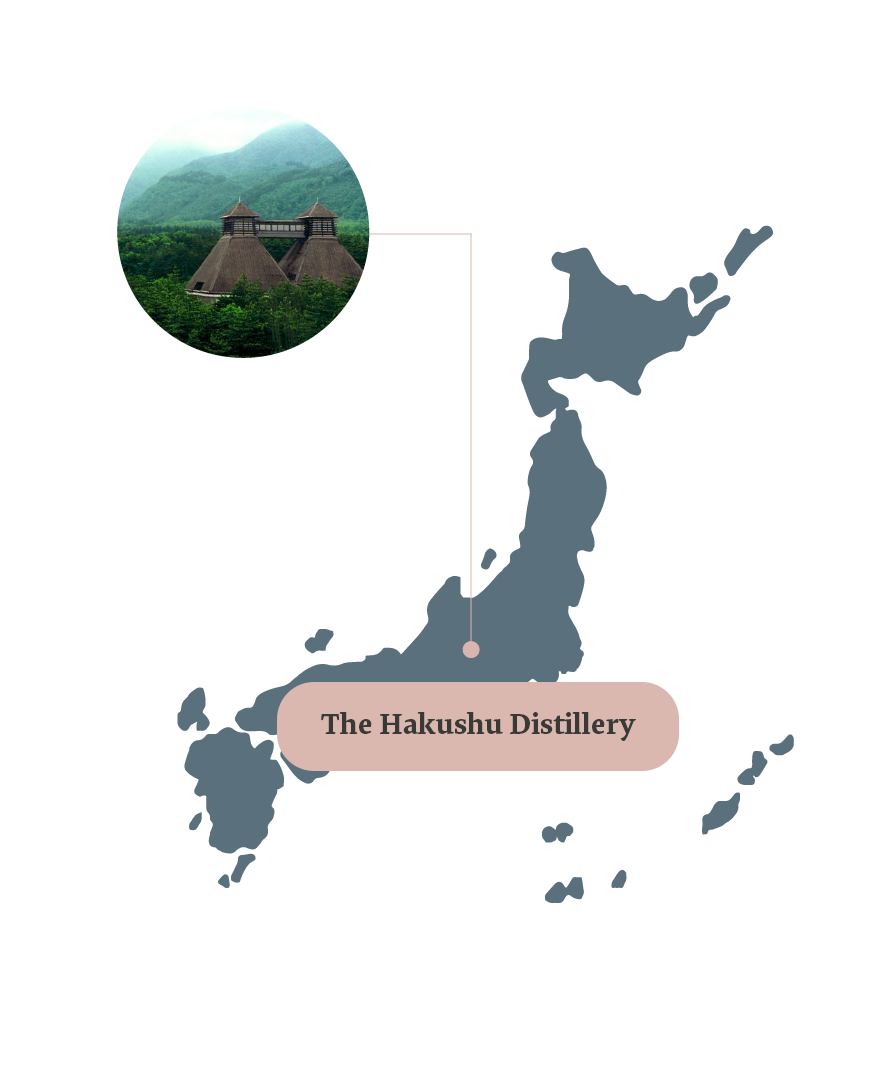 History Of The Hakushu Distillery

Tasked with producing an original whisky distinct from those originating at Yamazaki distillery, the Hakushu distillery was built as Suntory’s second distillery in 1973 on the 50th anniversary of the start of construction at its sister facility.

The distillery, which has created a rich variety of whiskies since its opening, is one of only a few distilleries in the world to be located at a forested, high-elevation site. Initiatives designed to coexist with the rich natural environment at the base of Mount Kai Komagatake include setting aside about 820.000 square metres of forested land and protecting bird life by establishing a wild bird sanctuary.

Hakushu distillery is located near the pristine waters of the Ojira River, which has been designated by Japan’s Ministry of the Environment as one of the highest-quality water sources in the country. The construction of the distillery, which is surrounded by expansive forest, was the culmination of a many-year search for a site that could best take advantage of Japan’s natural bounty in the process of making whisky. A willingness to experiment through a process of trial and error has led to the production of a remarkable variety of single malt whiskies at the facility, bringing to fruition the goal of creating a world-class whisky that would please the delicate Japanese palate. Hakushu distillery, which produces Hakushu single malt whisky and an array of other world-renowned, high quality whiskies, continues to pursue new whisky flavours and aromas in a beautiful natural setting.

After carving a path down through the rock of Mount Kai Komagatake, clear-flowing rainwater joins the Ojira River and the Jingu River to form an alluvial fan of white sand at the foot of the mountain. The name Hakushu, which means “white sandbar,” reflects the geological character of the site. The clear air and cool, humid climate of Hakushu’s vast forests allow the distillery, one of only a few such facilities in the world to be located at an elevation of 700 meters or above, to produce high-quality whisky through a slow, unhurried process.

The pristine waters of Hakushu

Water from the mountains is a gift from the gods, and indeed, the natural water of Hakushu could only be made through the mysterious workings of the great natural wilderness surrounding the site, which is known for the clear-flowing Ojira River, considered one of Japan’s most exceptional sources of water. The soft water created as snow cover on the slopes of the Southern Alps melts and seeps down through the area’s granite strata serves as the beginning of the malt whisky produced by Hakushu Distillery.

The real process of making single malt whisky begins with a procedure called mashing, in which malt is ground into fine pieces and mixed with hot water in a tank called a mash tun. As starch in the mash is converted into sugar, the mixture is slowly filtered to create a clear liquid known as wort. Suntory produces whisky in Hakushu, an area that is blessed with exceptional natural water, precisely because the quality of the water used influences the flavour of the wort. Next, the wort is transferred to a washback, and yeast is added. The yeast generates alcohol, carbon dioxide gas and congeners of flavour in a process known as fermentation. Hakushu distillery uses wooden washbacks. Despite demanding temperature control requirements, wooden washbacks not only take advantage of the site’s natural bounty, but also help produce refreshing yet complex single malt whiskies through the action of the distillery’s naturally occurring lactic acid bacteria and other microorganism populations.

The wash produced during the fermentation process is distilled twice in rows of pot stills of different shapes and sizes. By using different stills, the distillery is able to produce a variety of whiskies with flavours ranging from light to full-bodied. Direct-fired distillation at a temperature of about 1.200°C creates an even greater range of flavour-contributing substances.

Hakushu distillery’s use of a variety of processes and techniques from the mashing stage through distillation allows it to produce an array of single malt whiskies with a variety of characters. Following distillation, whiskies are placed in casks and allowed to slumber in the distillery’s aging warehouse until they have mellowed. The Hakushu distillery primarily uses hogshead casks, which are suitable with the clear air and cool, humid climate.

How To Find The Hakushu Distillery

Hakushu distillery offers guided tours of its facility. The tours are conducted in Japanese but an audio guide in English, French and Chinese is available. You can reach Hakushu using the following modes of transport:

Train – the distillery is located about 10 minutes by car from Kobuchizawa Station on the JR Chuo Main Line.

Car – the distillery is located 15 minutes by car from the Kobuchizawa Interchange on the Chuo Expressway. The car park has a capacity for 200 passenger cars (Large buses can also be accommodated). Please note – Drivers are not permitted to sample whisky as consumption of alcoholic beverages by drivers is prohibited by law. Thank you for your cooperation.

Bus service – From Nirasaki to Hakushu Distillery, No. 3 boarding area at Nirasaki Station → Matsubarakami (the closest bus stop to the distillery).

From Hakushu Distillery to Nirasaki – Matsubarakami (the closest bus stop to the distillery) → Nirasaki Station.

For departure times, fares, and other information, please contact the Yamako Town Coach Nirasaki Sales Office by phone on +81-551-22-2511.

The distillery may be crowded depending on the season of your visit, and you may be asked to wait some time before your tour begins. Thank you for your understanding and patience.

Hakushu 12 Year Old is one of the top selling bottles of whisky produced by Suntory. If you like the peated flavour of Scottish single malt whiskies, then Hakushu will blow your away! The Hakushu line stands among other top selling Suntory products including favorites such as the Yamazaki and Hibiki.

If you like the peated flavour of Scottish single malt whiskies, then this Hakushu 25 Year will blow your away! This single malt has been widely praised by some of the biggest names in whisky, including a score of 93/100 by Jim Murray in 2009. If you’d like to taste one of the hallmark Japanese whiskies, this Hakushu will be a sure delight!

The Essence of Suntory Whisky Set