Amidst the continuing shortages of Japanese Whisky and growing list of discontinuations to hit the Suntory lineup, many fans have worried the era of the Hibiki 21 might be coming to an end. With stocks of well matured liquid reported to be at all-time lows, enthusiasts have feared that the clock was running out on the expression that is arguably the most famous Japanese Whisky of all time.

Fortunately, for the time being, fans can breathe a sigh of relief.

In a surprise move, Suntory has announced the release of limited quantities of a brand new 2019 edition of the legendary Hibiki 21 Year Old. This is great news for fans of Hibiki, and for Japanese Whisky is general, as it keeps one of the industry’s most prolific stories alive.

It may have been the 30 Year Old that put the Hibiki brand, and indeed Japanese whisky, on the global map with a trophy win at the International Spirits Challenge in 2004, but it wasn’t long before the 21 outshone it’s older sibling by winning a string of prestigious awards.

On top of a Gold medal at the International Spirits Challenge in 2012 and three trophies at the same competition between 2013 and 2015, the 21 Year Old went on to win “World’s Best Blended Whisky” in six out of the nine years between 2010 and 2019.

That’s the thing with the Hibiki 21, every single year it continues to beat its competitors in blind tastings at competitions around the globe. There’s no doubt that the world’s best blenders are making every attempt to create an expression that is equally as compelling, but they are yet to manage it. All of this points towards the fact that this outstanding expression is arguably the best blend ever created.

So with the 2019 Edition set for launch, you’ll all be wondering what’s new this time around. The changes are subtle, but they serve to add an element of flair and elegance to this legendary whisky.

A new, rustic looking box is the most apparent of these. Straying away from the glitzy, purple box with golden trim that looked like it could house a bottle of Giorgio Armani cologne, this new one feels even more deserving of housing a multi-award winning bottle inside.

The previous editions were eye-catching, there’s no doubt about it, but this new box has an air of experience, mastery and sheer class about it. Even on a shelf of old & rare whisky, this one wouldn’t look out of place. In other words, it’s gone from ‘excellent blended whisky’ to ‘legendary piece of Japanese whisky history’. Given the 21 Year Old has now done more than enough to cement its place as one of the all time greats, it more than deserves this new aura and feel. 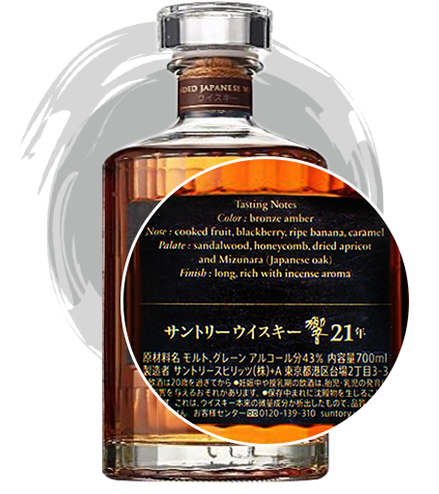 One thing that hasn’t changed is the composition of the liquid. It retains the original formula that has earned dozens of prestigious awards from leading competitions and houses the same outstanding tasting notes inside. After all, when a whisky is this good, there’s simply no sense in making a change.

That means you’ll experience a sweet and complex expression that exhibits outstanding balance through a range of harmonious aromas and flavours.

Strawberry jam, orange peels, apple crumble, sweet caramel, cherries, a whiff of smoke and a range of dried fruits all work in tandem to tantalise the nose and palate and leave you longing for another dram time and time again.

These are the notes that have allowed this whisky to pick up award after award in recent years and it’s likely that it will continue to do so in the near future. For that, well need to wait and see, but for now it’s worth sitting back and enjoying another glass of this masterpiece and letting it take you on the journey that has consistently delighted millions over the past decade or so.

It’s a truly unique experience and one that Hibiki want every whisky fan to continue to be a part of.

If you want to add the newest edition of this legendary whisky to your whisky cabinet and enjoy the pleasures that it holds within, order in our online store today and we’ll deliver direct to your door.