Suntory recently announced the release of the fourth volume in their popular Essence of Suntory range. The series has acted as something of a stop-gap for the drinks giant, providing Japanese whisky fans with some quality expressions to get stuck into while we wait for the on-going whisky shortage to ease.

It’s no secret that new age-statement expressions from Japan’s big distilleries, such as Yamazaki, Hakushu and Yoichi, have been few and far between thanks to a nationwide shortage of maturing spirit, so we’re all very thankful that one of Japan’s biggest and most successful whisky producers has found a way to continue releasing exciting expressions.

The series has been eye-catching and somewhat experimental from the outset, and this latest volume is perhaps the most ‘out-there’ to date, but we’re glad to say that the risks Suntory have taken to produce these whiskies have paid off. 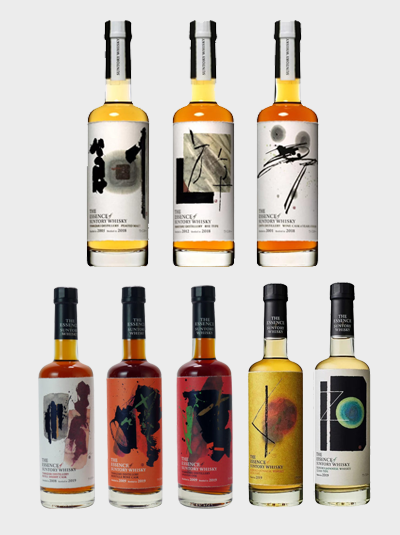 The Essence of Suntory range first came onto the scene in 2018 with Volume 1, which included three whiskies distilled at Yamazaki, Hakushu and Chita. Each had unique characteristics of its own that set it apart from other whiskies produced at the famous Suntory distilleries. The Yamazaki was peated, the Hakushu was Rye-Type whisky and the Chita was given a wine-cask finish. The volume went down a treat with fans around the world and that likely inspired Suntory to continue in the same vein.

Volume 2 arrived and it brought three whiskies distilled at the Yamazaki distillery, each matured in a different type of Spanish sherry cask. This one got everyone particularly hyped, thanks to the feverish excitement that the words “Yamazaki Whisky” can conjure, and it did not disappoint with it’s huge array of intricate and complex notes to explore.

Volume 3: Cedar Throwdown followed in late 2019, and was perhaps the most experimental set in the range until now. It featured two blended whiskies created to fit two specific flavour profiles – ‘clean type’ and ‘rich type’. They were matured respectively in the Yamazaki and Hakushu warehouses and, despite being blends that lacked the power of a distillery name behind them, the general feedback was that these were very good expressions indeed.

Now, Volume 4: Sakura and Rice has arrived and Suntory have chosen to take a further step into the world of eclectic whisky processes and expressions.

The attractive new set includes two expressions, one produced at Chita and matured for 18 years, including a particularly interesting finishing period, and another that is, wait for it, Suntory’s first ever rice whisky release!

To start with the latter, “Rice Whisky” is a term that has popped up with increasing regularity  in the Japanese whisky industry in recent years, however it has generally been shrouded in controversy. This is because many ‘whisky producers’ have been creating Shochu and labelling it as rice whisky, feeding into the concerns surrounding the lack of Japanese whisky regulations.

The unique process has created a clean, slightly spicy whisky that brings light notes of peaches, fruity incense, hints of ginger and a moreish juiciness. It’s a soft, gentle expression that has a lot to be explored, and highlights the possibilities of using rice to create quality expressions of Japanese whisky.

The second bottle in Volume 4 was distilled at Chita, Suntory’s grain distillery. It’s a single grain whisky that was distilled in 2000 before being aged in white oak barrels for around 15 years. It was then transferred to Sakura casks (cherry blossom wood) for a three year finishing period before being bottled.

Sakura wood has been used with increasing regularity in the Japanese whisky industry and, in this case at least, it has had profound, elegant effects on the whisky. It brings cherries, mochi and whiffs of Sakura flowers on the nose, before lychee, white grapes and sweet honey dance on the palate. The scent of cherry blossom returns on the finish and lingers for a long time, while gentle wasabi spice hangs around in the background. All of this is delivered with a smoothness only found in the most carefully crafted expressions, making this a truly accomplished single grain whisky.

Both expressions are interesting and unique in their own right, and both hold a delightful array of notes inside. They’re not quite the new Yamazaki and Hakushu age-statement expressions we’re all so keen to see (we’ll be waiting some time to come for those), but the Essence of Suntory Volume 4 does bring two quality new whiskies for us to enjoy while we wait.

The experimental nature of these releases, and the other three volumes that came before, go to show that you don’t need a plethora of ageing stock to create unique, interesting and delicious expressions and, hopefully, that’s something that other producers (particularly those labelling imported whisky or shochu as Japanese whisky) will take note of.

There are so many different processes, whether that be with regards to distilling, maturing or blending, that can be used to make whiskies stand apart from the crowd and we’re only likely to see them used more frequently as time goes by. For the Japanese whisky fan – that’s something worth getting excited about.