Learn About the Yamazaki Distillery 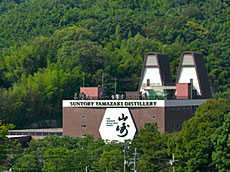 Whisky From The Yamazaki Distillery