For the past 10 days we’ve been celebrating our 5th anniversary through daily offers, huge sales, giveaways, competitions and finally dekantā Live. We hope you all got a chance to join in with the festivities and picked up some beautiful bottles in the process. It’s been amazing to see everyone come together to have some fun, particularly in such trying times, and we’re truly thankful for all of the birthday wishes and kind words that have been sent our way. Thank you kindly!

Now, we have just one more thing in store for you to top things off. Today, we’re excited to reveal our 5th anniversary bottling, a whisky so new, elegant and beautiful that you simply must have it in your whisky cabinet – the dekantā Exclusive Asaka Aoi Edition.

Sasanokawa Shuzo was founded in the Tohuko region of Japan, all the way back in 1765. Over the next 150-some years, they perfected the craft of sake and shochu production, becoming famous for their expressions around the entire country.

In 1945, they set about a new venture and were granted a license to distill whisky. They launched the Yamazakura brand, while working to create Japanese whisky history at the same time by helping Ichiro Akuto to launch his now famous Ichiro’s Malt brand. When the Hanyu distillery closed its doors in 2004, it was Sasanokawa who held on to the remaining casks, making the wonderful, rare expressions we see today (such as the incredible Card Series) possible.

Yamazakura expressions were historically always blended whiskies, so in a world dominated by a love of single malts, they struggled to compete against the industry’s big players. That’s not to say the brand struggled in general, they actually experienced relative success around the country, but competing with the likes of Nikka and Suntory was at that time out of the question for a brand focused on blends.

In 2015, Sasanokawa decided that they wanted to take the next step in the whisky world and begin producing their own single malt whiskies, and so, they built the Asaka distillery deep in the mountains of Fukushima.

Over the next few years, they treated us to a number of new make expressions, allowing us to sample their spirit’s journey to becoming whisky. Despite only being new-make spirit, the expressions impressed us and a number of others in the industry, and soon we were all very excited for their first single malt release.

When it arrived, it was nothing short of brilliant. The Asaka The First brought unique character, delectable notes and a clean, crisp mouthfeel to your glass. It had everything you would want from a young whisky and the fact it was the first Japanese single malt released by a new distillery in years only made it more special. 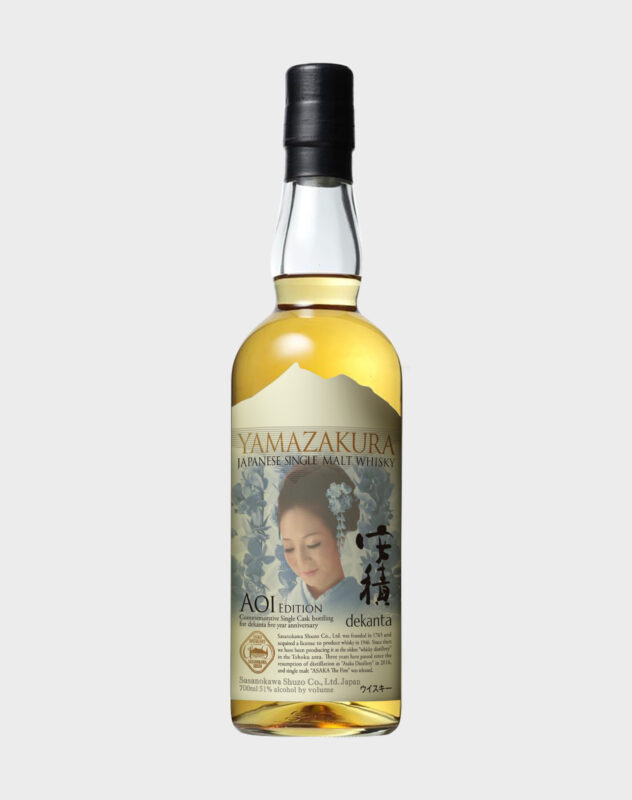 Today, we’re excited to launch the second single malt to come from the Asaka distillery – The Aoi Edition. We’ve been working closely with the distillery in recent months and we were absolutely thrilled to be given the chance to bottle this special cask as an exclusive for our 5th anniversary.When naming the bottle, the team was drawn to the Japanese the word “Aoi” which means blue.  With blue being a color commonly used to represent a 5 year wedding anniversary among our Western clients, combined with the profound significance of the color in Japan, it was the perfect fit.

Blue represents purity and cleanliness in traditional Japanese culture, largely because of the vast stretches of blue water that surround the Japanese islands.  Today, the importance of the colour can be seen in every aspect of Japanese life, from the national football team uniforms and the Tokyo Olympics logo, to the traditional kimonos and yukatas worn by women and men across the country.

We felt there was no better way to describe the beautiful whisky that we are presenting today.

Distilled in 2017, it was then matured in a first-fill bourbon cask for 3 years, before bottling in 2020. It brings an astounding array of notes to the table that allow us to peak behind the curtain of the Asaka distillery and experience first hand the passion, knowledge and expertise of those working there.

The nose brings a burst of citrus fruits, freshly sliced apples, gentle oak and hints of pear drops, before making way for vanilla ice cream, salted caramel, creamy toffee, candied lemon peel and gentle pepper spice on the palate. The finish is medium length and tops the whole thing off in style with another vibrant burst of juicy fruits, baked apples and gentle spiced oak.

The label features beautifully blue hanging flowers and our very own, elegant as ever, Makiyo Masa. It was Makiyo who founded dekantā half a decade ago, and so we felt it was only right that she featured prominently on this memorable release.

The Aoi Edition is an astounding whisky that captivated our whole team when they sampled it; and we cannot wait for you to experience it for yourself, and tell us what you think. Only 343 bottles of this beauty were produced, so act fast if you want to get your hands on one.